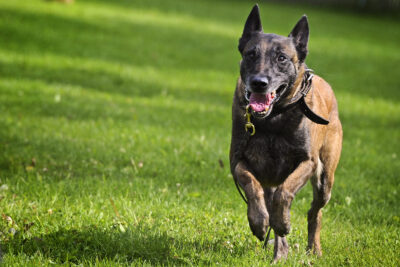 Belgian Malinois dogs are large, medium-sized working dogs that were originally bred to be all-purpose farm dogs –to herd, guard and protect, but today they are often used as police dogs, service dogs and guard dogs. They are intelligent, brave and alert and make great companions for active families. They are known to be one of the fastest dogs in the world. But, how fast can a Belgian malinois run?

On average, Belgian Malinois s can run up to 35 miles (56 km) per hour. In sports competitions, they are timed at 38 miles (61 km) per hour, equivalent to a human running the 100-meter dash in about 5.4 seconds.

Also, they can run longer distances than most other dogs because they have more muscle mass in their legs, greater lung capacity and greater endurance. But it is not advisable to let them run for long. Belgian Malinois are very active dogs with a lot of energy; they will keep running until you make them stop. They need a lot of exercise and physical activity to prevent boredom and bad behavior. Many dog breeds can run well, but Belgian Malinois excel at the sport of agility.

How high can Belgian Malinois jump?

The Belgian Malinois has high jumping abilities and is capable of jumping 12-16 feet high, which makes them ideal for police work.

The Belgian malinois can jump up to 16 feet high. They can leap with their hind legs up in the air. Belgians jump time after time without getting tired. They also have endurance and some will continue for as long as an hour running alongside a bicycle. Their athletic prowess makes them useful in many endeavours.

Also, these dogs are amazingly agile, making them capable of jumping over fences and other barriers. They are also very protective of their homes and families, making them great guard dogs as well.

Dogs in general love running, and the Belgian Malinois is no exception. These dogs are natural runners and need plenty of exercises.

Belgian Malinois thrives on vigorous exercise and plenty of it. If you are looking for a lazy Lapdog, look somewhere else. The Malinois is perfect for running beside bicycles, hiking, or simply running in the yard to burn off energy.

Optimally you want them to be over one year old when you start to work with them, but Belgian Malinois can keep up just about anything in the exercise department. These dogs need adequate exercise and mental stimulation daily.

Belgian Malinois is a very fast dog. Their speed and endurance allow them to quickly move around obstacles on an agility course or when herding sheep.

These dogs are very agile and very good at keeping their owners safe while they run by alerting them to any approaching threats or people.

Just you don’t know, your Malinois is a high-energy dog who needs a lot of exercise and training. In the military, Belgian Malinois dogs such as yours were described as “blurs of fury,” with speed sufficient to keep up with horses at full gallop. A highly intelligent dog, your Belgian Malinois can be trained for personal protection and police work.

Belgian Malinois dogs can swim. Their long and strong legs allow them to move quickly in the water. These dogs have been used as canine rescue units within the police department.

Also, Belgian Malinois dogs can be trained to swim with the right equipment. Swimming is a skill you should only consider introducing once your dog has become skilled at walking on a leash and obeying basic commands such as sitting, lying down, and staying.

Before you introduce your Belgian Malinois to the water, make sure you have prepared him properly and taken him to the vet to ensure that he is not suffering from any health conditions.

They like to cuddle, Although we can’t answer with surety for all Belgian Malinois. Some are quite solitary and prefer to sleep alone. But most will accept a little extra attention from time to time. And many enjoy being petted and stroked. Only on their terms, of course!

The long answer is that the Belgian Malinois is an energetic breed that needs a considerable amount of exercise to stay happy and healthy.

He’s at his best when working or playing actively with his owner, so he tends to be happiest when he’s dog-park-basketball-stadium active. Athletic, lean dogs like this one will not want to lay around on the couch all day.

Do Belgian Malinois get cold?

Belgian Malinois can get cold, but they typically show little signs of it. They have a moderate tolerance to cold temperatures. Belgian Malinois have a short-to-medium length weatherproof coat, which means they are protected against the cold and wet.

Furthermore, Malinois have a double coat, which means that they have two layers consisting of an undercoat and an overcoat. The dense undercoat supports heat retention and insulation. It provides extra warmth during the winter.

Therefore, they can stay out in the cold/heat as long as they have shelter to escape hot/cold temperatures and are not left out all day without water. Also, if you live in a location with extremely cold winters, you may want to invest in a heated dog house pad as well.

Are Malinois good with other dogs?

The Belgian Malinois is a medium-sized dog with a lot of energy. While they can be friendly and outgoing towards other dogs, this breed isn’t tolerant of dogs outside their immediate family.

Make sure to properly socialize your Malinois with other dogs when he is young, and schedule regular play-dates with his canine friends –both small breeds and large breeds- to make plenty of new friends.

Also, Belgian Malinois dogs are very energetic and enjoy the company of other dogs. Their high energy levels make them good companions for energetic and active people. Still, care needs to be taken to ensure they are under control to don’t intimidate other dogs in the household.

Remember that just because they are medium-sized doesn’t mean they do well around large or small animals like cats and rabbits, if you have any in your household. How many miles can a Belgian Malinois run?

A Belgian Malinois can run anywhere from 7 – 20 miles non-stop in a day, depending on age and health. On top of that, it still got the energy to love up on you all day.

This dog is an all-around athlete relying on speed, endurance, and explosive power for its various tasks ranging from search and rescue, herd control, and jumping high enough to put an arm around a giraffe’s neck.

Also, while in the Army, they cover up to 6 miles in one hour straight. This breed of dog used to be used for cart pulling, drafting and herding. It was a popular breed for the soldiers in the war because of its high intelligence and endurance.

Belgian Malinois are the most intelligent of all dog breeds, according to the “Guinness Book of World Records.” Malinois have a high work ethic and high drive. They are eager to please and learn commands for obedience or work in less than five repetitions!

In addition, Belgian Malinois scores high in obedience training and working intelligence, which makes them easy to train for all kinds of tasks. I guess it’s safe to say that humans created this breed!

The downside of their “smartness” is that they can often be difficult to train well because of their independent thinking and “I’ll do what I want” mentality.

Do Belgian Malinois jump a lot?

The answer to this question depends and they don’t jump normally, but their energy and athletic abilities make them excellent jumpers.

Malinois don’t jump much when they are inside their home with their owners, but they are highly active dogs, which means that once they are out on the road or at the park or in the backyard, they will run and jump around like crazy.

But, Belgian Malinois do like to climb. They’re quite an athletic breed that needs a lot of exercises, so you should have plenty of walking space for them.

Are Belgian Malinois easy to train?

Belgian Malinois are intelligent and wise dogs. While they can be a challenge to train, given the proper tools, they learn easily.

Their eagerness to please makes them excellent candidates for competitive obedience. They also make wonderful working dogs, as their natural energy and athletic ability can be channelled into various sports and activities. Can Malinois be left alone?

Malinois can be left alone, but they may become bored and want to get into something after a while. Malinois are known to be very smart and hyperactive. However, they aren’t meant to be left alone for a long time, especially when they’re young and still learning.

If you cannot take the dog to work with you, be sure that you have someone who can check in several times a day until they are older. They need attention and a lot of exercises so you should spend a lot of time playing or training.

In addition, Malinois can become destructive when they are bored, so they should not be left alone indoors for long periods. They also love to play and need regular exercise. An adult Malinois needs a minimum of two 45-60 minute walks per day.

How heavy do Belgian Malinois get?

Dogs of this breed tend to grow very fast in the first few months, but they usually reach their full size when they are 14 to 18 months old.

The Belgian Malinois can reach 23-26 inches in height (58-66cm) and 45-80 pounds (20-36kg) at full maturity. They are relatively tall dogs but with a lean body structure. They do not get overweight easily.

How long do Belgian Malinois live?

Belgian Malinois are one of the healthier dogs, especially without clever breeding. They take a long time to reach their full maturity, anywhere between 3-12 years of age.

Furthermore, the average lifespan of a Belgian Malinois is very similar to that of an average human. A dog’s life expectancy depends on many things such as diet, exercise and genetics.

As long as you keep your Belgian Malinois healthy and well-fed, this medium-large sized canine can live for about 11 – 13 years.

What is the IQ of Belgian Malinois dog?

They can run up to 56km per hour. They are known for their agility and endurance, which means that they can run longer than other breeds of dogs. The health of your Malinois is important so, do not make them run for longer periods at a time.

Belgian Malinois dogs are very intelligent; thus, they need a lot of mental stimulation. You can train them in many dog sports such as agility or Schutzhund.